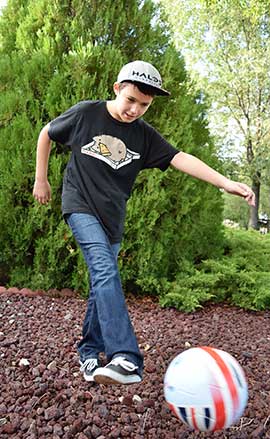 In many ways, David seems to act just his age, but in others, he is nearly-12-going-on-30. The latter comes from his current project using a Go-Pro video camera to create his own movie with LEGOS, which he plans to post on YouTube.

Since second-grade, David has lived in Prescott with his older sister, his mom and her long-time significant other. He spends every other weekend with his father in Phoenix. An adult male who could spend a few hours with him each month, creating with LEGOS or Chibi animѐ – he loves watching and drawing the Japanese cartoons – would be a wonderful addition for David. Another favorite indoor activity is playing video games, such as Minecraft, Call of Duty 2, and Terraria, all of which he says are more fun with a friend.

David also likes outdoor things, from bicycle riding to kayaking. Sledding in the winter is great fun, too. He hopes to play soccer for his junior high and into his high school years.
He’s pretty busy with school, where his favorite subjects are social studies and language arts, and he plays the clarinet in band. He says his teachers are “really fun.” A menagerie of rescue animals at home – three cats, two dogs, two turtles, and a lizard – also demand some of his time.

Anyone interested in being a Big to David or another child, or in referring a potential Little, can call Yavapai Big Brothers Big Sisters at 928-778-5135, or if you can’t be a Big, how about supporting a Big? The Arizona State Tax Credit is one way to do so. YBBBS always can use volunteer office help and has other ways people can be involved, as well. Go ahead and call. The rewards can be endless.

Be a Match Support a Match