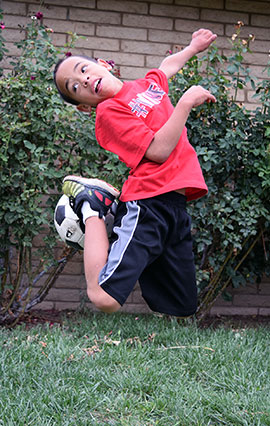 Even though he’s only eight, Isaac can carry on an intelligent conversation while dribbling a soccer ball across the patio. He watched a lot of Olympic soccer and knows about many of the players on all sorts of teams. But Isaac would rather play, whether at home, during recess or, someday, on a team. He likes both scoring and defending, but says playing goalie is difficult. “Football is my second best sport,” Isaac says, adding that he likes to run.

Isaac and his twin sister are in third grade, but in separate classrooms. His favorite subject is math.

Their mom is in Phoenix and they like to swim when they go there to see her. Their father is out of the country. They live with their grandparents, an older brother and sister, a cousin, aunt and two uncles (one of whom is about Isaac’s age), along with four dogs, in Prescott Valley. It’s a busy household, with people going in all directions and his siblings recently got matched, so Isaac could really benefit from a Big Brother who can devote time exclusively to him, especially if that Big likes soccer.  But Isaac says he also would like a Big who could take him to the park and just “go places” and “have fun.”

And in a show of maturity beyond his years, Isaac says of a potential Big, “I would learn more about what he does.” He aspires to learn more about animals, too, and rattles off a long list of the ones he likes, from sharks and cheetahs to bunnies to garter snakes.

Isaac enjoys video games like Tycoon – an intricate game he describes, again while controlling his soccer ball. Then he performs a difficult maneuver he calls a rainbow flip. “It’s called that for a reason,” he says, and with his feet, flips the ball from behind him up and over his head, like a rainbow’s arc.

Currently Yavapai Big Brothers Big Sisters particularly is in need of Big Brothers. Anyone interested in becoming a Big can call 928-778-5135, or if you can’t be a Big, how about supporting a Big?

The Arizona State Tax Credit is one way to do so. YBBBS always can use volunteer office help and has other ways people can be involved, as well. Go ahead – pick up the phone and call today. You’ll change your own life and the life of a child in a most uplifting way.

Be a Match Support a Match